Dismantling the boxes
I have had many labels during my life. I have them stacked them up like little wooden boxes so they don’t take up too much space. Now I choose not to live my life in a box ..there’s so much more space when you don’t.

When I was born, I was a Girl. So they told me. I had unruly curly hair and a cheeky smile and I made friends with everyone. As I grew up I liked best to wear jeans and I always laughed when people thought I was a boy. Aren’t they silly, I thought, but I liked it all the same. I ran with the boys and could race many of them too. But I wore my hair in plaits. Because I was a girl. I liked being young because I was just me. I got into scrapes and was nearly expelled from school. I fell in love when I was 12. I can still feel the softness of her skin as she cuddled up against me. I knew I liked girls. I was a Girl, too. So they told me.

Then one dark day puberty arrived like a demon at my door and wiped the smile from my face. I could no longer be the androgynous child that I had been, for my breasts grew and my body changed. I would stare in the mirror. This was not my body. I wanted my old one back. I had got used to being a girl. But that was not to be. I was now given another label. Woman. I didn’t like this label as much but they wouldn’t take it back.

When I was 15 I dated my first boy. I came home from an evening out to find that my mother had laid another label out on my bed. It said Straight. I wasn’t too sure about this one so I put it on top of the wardrobe. In fact I did go out with a number of lads as I wanted to see what all the fuss was about. But the label stayed on the wardrobe and gathered dust.

I didn’t like my teenage years. Home life was hard. When I was 17 I came out as a lesbian …well, there seemed little point in hanging around when I knew I loved women. My parents didn’t approve. My father told me not to shit on my own door step and so I packed up my labels and left home.

College beckoned and I took up studying. This was a better time for me. I arranged my labels neatly on the bed before I went out each night. Woman Lesbian. I got used to the first and wore the second with pride. But still I used to share a secret smile with myself when people sometimes thought I was a Boy.

Then one day in a lesbian club in North London in walked a handsome young guy in a neat suit and tie. I thought he looked so cool. My companion whispered to me “He’s Transgender. She used to be a Girl and now he’s a Boy.” I barely remember any further conversation but I do know that when I left that night I had two more labels tucked in my pocket. They read Transgender and Boy. When I got home I laid them secretively in the back of my wardrobe and covered them with my shirts.

After three years I left university with an enigmatic smile and a suitcase full of memories and went to London. I think I thought I was Dick Whittington. I had no money and no where to live. I was used to the lesbian scene now and I was happy meeting, having fun and sleeping with many women. We were racing through the 1970s. This was the age of lesbian evenings in rooms at the back of pubs and gatherings in small clubs with front door bells. However, life had an edge of darkness, for gradually I was beginning to realize that I was starting to stand back from the fun. I was just watching the world before me, my hand in my pocket gently holding my hidden labels. And one day as I stood at the edge on my own, I realized I was crying.

Things had to come to a head and I knew I had to see what would happen if I wore these labels permanently. I told no one how I was feeling. I have very good shutters. But I needed help. Then one day I met someone as beautiful and wild and Femme as you could wish and she took me by the hand. I fell totally in love. I was 23.

We breathed the same air. Her thoughts became my thoughts. Mine became hers. We fell asleep one night after making love and when she woke up I was a Boy. I don’t mind, she laughed ..it’s you that I love. I loved her all the more. And I probably love her still.

But Boy was more than just a word in my head. And more than the clothes I wore or the cut of my hair. This was a label I liked. So I applied to go on the Transgender programme at Charing Cross Hospital. From this point on they told me, I was to live as Male.

I went home and I packed away my Woman label ( though I left the Female one hanging on the back of the door as I always liked that one) and took out the one saying Boy. I couldn’t think of myself as Man so I kept Boy out instead. Then I sat on the bed and looked the one saying Lesbian. I didn’t know what to do with this one, so I hung it on the door with Female, beside the small one that said Dyke.

Jeez if things go on like this, I thought, I’ll need a bigger suitcase just for my labels.

The TG Programme confidently told me that if I didn’t feel like a women then I must be a man. I didn’t really listen, for I was happy with this new me. This new boyish me in male clothing and with a male name. My girlfriend loved me too and she adored me in a suit. After passing the introductory period I was now allowed to take my first course of Testosterone. Before giving me the first dose, I remember the doctor saying that he hoped I had a partner, as it would increase my libido somewhat. A small smile crept across my girlfriends lips. Ha, I responded to her with my eyes , as if I need help in *that* department.

You have to laugh as the needle hurts.

And so I saw puberty for the second time. But unlike the arrival of my first one.. this one I greeted with a smile. My voice broke gently and a small fuzz of light hair appeared on my upper lip. To complete the picture I was given an appointment for top surgery at Charing Cross Hospital in London. I remember being wheeled into the operating room surrounded by a haze of white coats…go to sleep murmured the nurse and when you wake up you will be in stitches. I didn’t know what the joke was but I went to sleep anyway.

And when I woke I smiled. Wow. I liked this new me even better.

I was now working the night clubs of London as a cocktail barman, then as Bar Manager. It was an exciting time and I loved it and I had a new girlfriend as well. Life got razzy. I had lots of girlfriends. I wore the label Boy ( I looked so young) and tucked the label Transgender into my back pocket. I only showed it to those that needed to know.

A couple of years passed and looking in the mirror one morning, and liking the person I now saw, I stopped taking Testosterone. It felt natural for me. I have never had stubble, I do not do hairy. I wear my clothes with a certain effeminacy. It felt good. My girlfriend liked it so much she stayed for 11 years.

Someone tried to give me the Man label once but that was a step too far. I didn’t have room in my wardrobe so I bought a large envelope and marked it return to sender.

Instead I painted the words Transguy on a makeshift board and hung it by my bed. And underneath I wrote Boi, FTQ, Me.

If there is humour in my life it is because I have put it there. I love life and feel that mine has been an amazing adventure so far. But I do not mean to hide the heartaches that have been there too .. and there have been many low points. I have been chased and spat at too many times to remember for looking queer, and at times I have felt isolated from both the lesbian and straight communities because in some peoples eyes I fit in neither. I have been hurt too often as well, by those that see only in the way society *tells* them to see me, rather than listen to what is in my heart. Yet I have loved and been loved over the years with a breathlessness that I hardly dare recall. I have a beautiful daughter who lives with me. I have traveled, owned my own restaurant and done a million other jobs. And I have many wonderful friends. And most importantly of all, I have lived every moment as if there is no tomorrow.

And now? I am still journeying. I like where I am going. It is rather exciting to be part of a time that the lines of gender are beginning to be allowed to roam free.

Give me a label. Just don’t box me into it, because tomorrow it may be in my wardrobe. 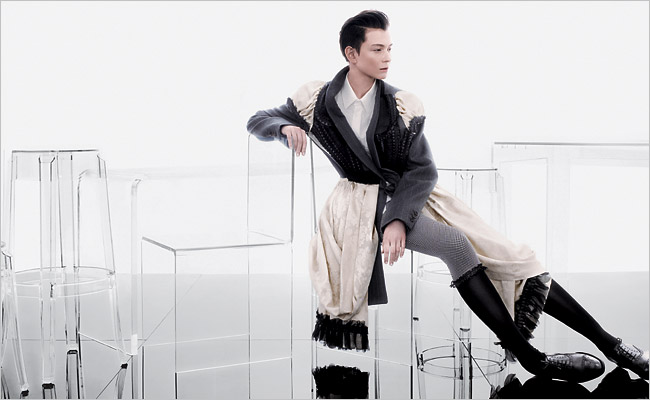 We have created lots of YouTube videos just so you can achieve [...]

The best flat phpBB theme around. Period. Fine craftmanship and [...]

All you need is right here. Content tag, SEO, listing, Pizza and spaghetti [...]

this should be fantastic. but what about links,images, bbcodes etc etc? [...]

Swap-in out addons, use only what you really need!

Why Would you Settle for Less when you can have More? Do not let other Authors Fool you with Empty Marketing Keywords. FLATBOOTS is what you Deserve. Built to last, Built from Scratch, Nothing Less.